St James Catholic Church began as a mission church located east of Lake Placid on Highway 621.  Archbishop Cole Carroll of the Archdiocese of Miami dedicated it on August 26, 1961.  Priests from St Catherine's parish in Sebring: Father John Vann, Father Martin Cassidy, Father Gerald Grogan and Father Edward Schneider serviced the fifty parishioners.  There was one Mass each Sunday at 8am. 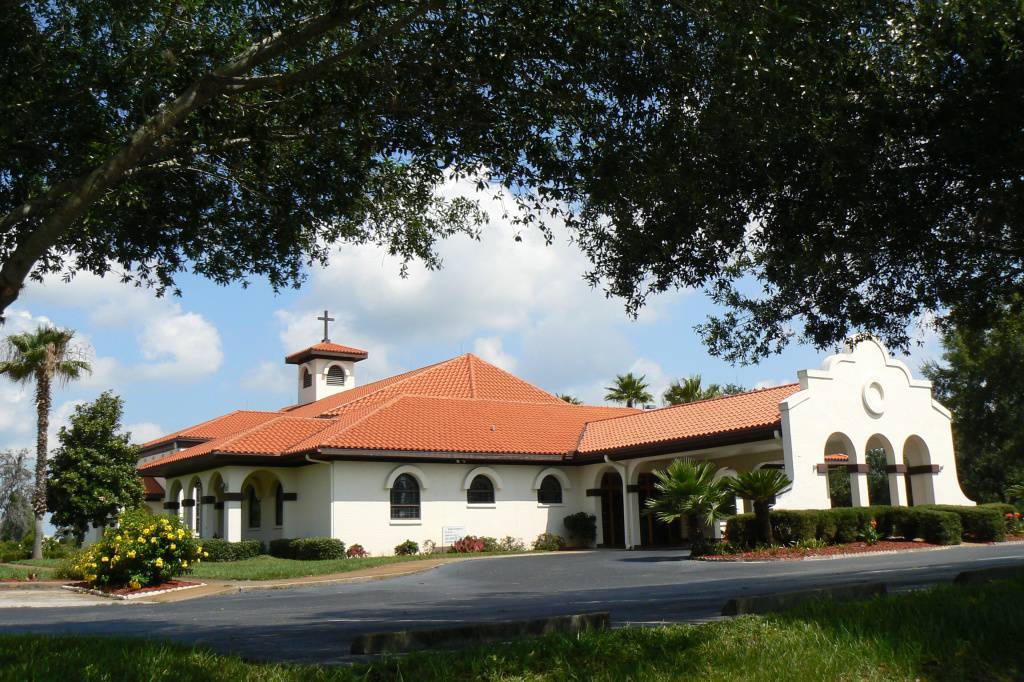 In June 1973, St James became a parish with Father Charles Schneider as its first pastor.  During Father Schneider’s six years as pastor, a rectory was built in Highlands Estates and the number of parishioners increased to 150.  The parish raised money to enlarge the church, make improvements and dedicate an outdoor marble statue of Our Lady.  Father Schneider was reassigned in October 1979.  Father Peter Quinn followed Father Schneider as St James’ second pastor.  Under the leadership of this very popular priest, the church purchased land on Lake Mirror.  Father Schneider was transferred in July 1982.  His successor, Father James Mac Loughlin, was with St James for a little over a year.

In June of 1983, Father Leo J Culliton became St James’ fourth pastor.  The number of parishioners steadily increased making it necessary to accommodate the overflow in the social hall.  While that doubled the capacity of the church, the space was still insufficient – a larger church had to be built.  However, due to zoning restrictions, it could not be built on the Lake Mirror property.  Shortly thereafter, property was secured in Placid Lakes.  With the sale of the Lake Mirror site and a highly successful building-fund drive, plans began for the new church.  Bishop John Nevins of the Diocese of Venice, of which St James was now a member, dedicated the present church on May 26, 1991.  Father Leo remained the pastor for 13 years.  Father Leo went to his eternal reward in January 2000.

Father Vicente Llaria was assigned to St James in June 1996.  Under his inspired leadership the parish grew in friendliness and service as well as in number.  He was instrumental in the development of The Women of St James whose members are active in many areas within the church and throughout the community of Lake Placid.  He also directed the planning and completion of a beautiful and unique Memorial Garden on the church grounds. Father Llaria retired in 2008 and went to his eternal reward while with his family in Spain in 2009.

On August 1, 2008, Father Michael J Cannon came to St James as Administrator and was named pastor on June 26, 2010.  With the arrival of Father Michael a new spirit of welcoming, renewal and discipleship has come to St James.  Under his guidance, many new ministries have been established, serving both the parish and the wider community.

On May 1, 2018, Father Anthonio was re-assigned to St. Maximilian Kolbe parish in Fort Charlotte. Father Vincent Clemente joined us as pastor.  The community of St. James looks forward to continuing God's work under his leadership.